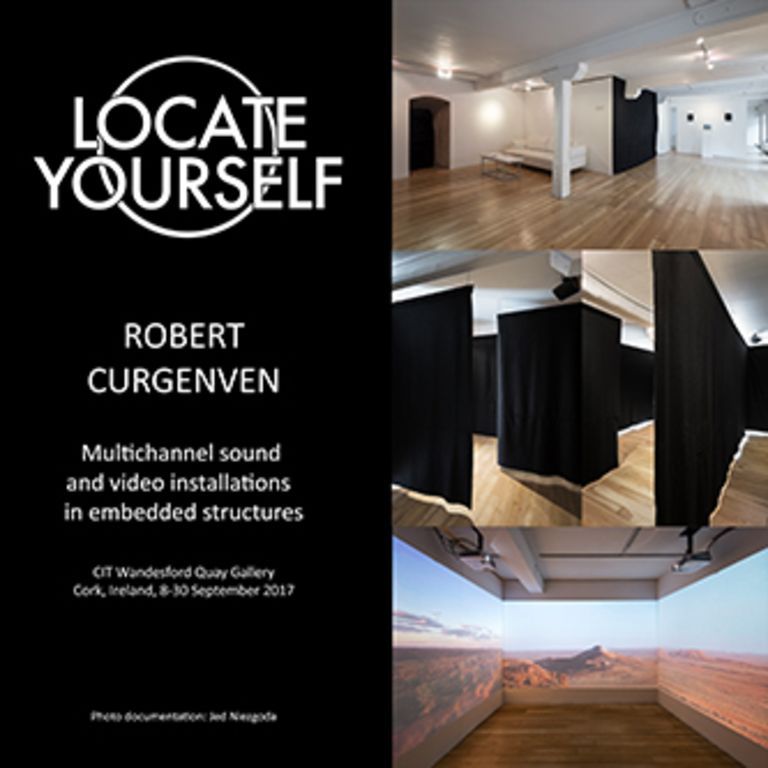 Review of the exhibition in Irish Times

Each of the pieces in Locate Yourself work together to highlight the different ways in which we orient ourselves and respond to location and context. The exhibition underscores the ways in which air and weather, perception and architecture frame and affect physical experience and navigation – not only where you are but also how you engage with it when you are there.

Locate Yourself is Curgenven's first solo exhibition of multiple works, presenting an overview of his spatial research over the past ten years. The exhibition is a selection of new installations alongside existing works plus interactive and video works derived from his recent critically acclaimed albums SIRENE, They tore the earth and, like a scar, it swallowed them & Climata.

Installation works in Locate Yourself:

Babel – 10 channel audio comprising 1000+ tongue twisters in 30 languages. Embedded in a 60sq.m central maze that is the gallery’s sole point of entry.

They tore the earth… - 3 channel video + 2.1ch sound in 3m cube – filmed in the Australian desert, exploring first-person themes of settler colonialism. This installation fits only 3 people for every 20min viewing, spaces limited

Locate Yourself will be part of Sounds from a Safe Harbour Festival, Culture Night 2017 and Open House Cork – Celebrating Architecture in the City.

“When you enter CIT’s Wandesford Quay gallery in Cork, there is a maze made of black fabric. Inside the maze, voices speak over one another: tongue-twisters spoken by 60 different people, in 30 different languages. The voices emerge from speakers hidden within the convolutions of the maze, always surprising, utterly unfollowable. It’s a quick way to get lost. .. Curgenven came to Cork after spells in Cornwall and Berlin, with a back-catalogue of records that hover between ambience, drone, and noise, where field recordings are layered with the resonances of pipe organs, guitar feedback, and turntable manipulation. These are patient records, which demand a degree of patience and concentration from their listeners. Like buildings, they do not reveal themselves all at once. Curgenven’s fascination with the sculptural, spatial quality of sound goes right back to his [roots].

Locate Yourself sets out to answer [how to articulate, aesthetically or experientially, the movement of air] through the exploration of boundaries; places where one thing blurs into another, where one kind of logic may become interweaved with a different order of sense entirely. Curgenven sees these boundaries less as borders, and more like the “limit of a definition”. Whether it’s in Cornwall, where land ends, or in the Red Centre of Australia, where it seems like land might never end, such perceptual frontiers are contested, contingent spaces, areas of diversity and unpredictability. For Curgenven, these edge-lands are ideal places to explore the boundaries of our cultures, our senses, and ourselves.”
- Ian Maleney,  Irish Times, September 2017

“The theme is indicated by the title and the artist’s description of his work as “spatial research”. Curgenven investigates how place is constituted through our perception. Underlying this is a radical rethinking of what constitutes “place” in the first instance... Rather than presenting abstract sounds, his works emphasise political context, personal histories, and the physicality of listening bodies... a strong show.”
- Robin Parmar, Enclave Magazine, Ireland, February 2018

“While taking the journey through Robert Curgenven's ambitious labyrinthine world of Locate Yourself, the word trust floated through my mind and resonated through the space. Moving through the constructed space interspersed with sound and video works, I was asked to put my trust in the artist, trust in my own perception of what I was experiencing and a trust in the familiar continuum of space and time. While there is an expectation that most artworks will seek an element of trust in the visitor, there are few that are quite so palpable. “
- Miranda Driscoll, Director, Sirius Arts Centre

“Spectrality is often and rightly associated within the realm of a dominant visual language that rests upon an origin of appearance and of looking (spe(cere)). However, it also gains close proximity in meaning to the fleeting presence – the comings and goings, and the withdrawals of an un-rested original – and to return as spectral thing; a presence in absence, and an absence in presence. It seems to me these terms are important to establish oneself in the task demanded by Robert Curgenven’s show Locate Yourself.  However, is not so much that” Locate Yourself” implies a no-where that permanently presents itself beyond us, nor does it suggest that the task of location in a fleeting temporal environment is an impossible one, but perhaps instead, that the task invites a certain level of introspection. In turn, this would seem to be issued by the artist as something like a quietly spoken plea that avoids any excessive expression or equivocation of the demand and silently turns us back to what are surely the origins and the places of the works themselves. If this is the case, it does so through a fundamental re-questioning of the limits of the site of the work and it makes us think about and look-again at what we thought are stable notions of space and memory, that are now continually inscribed with other consistencies and registers of place and event. What begins then from a simple task of location, becomes somehow knotted and turns towards a re-tracing of original atmospherics registers of place and time (context and duration), which reveals itself as a potent lingering acoustic after-life.“
- Jason O'Shaughnessy, Masters Architecture Programme Director, CCAE Cork Centre for Architectural Education