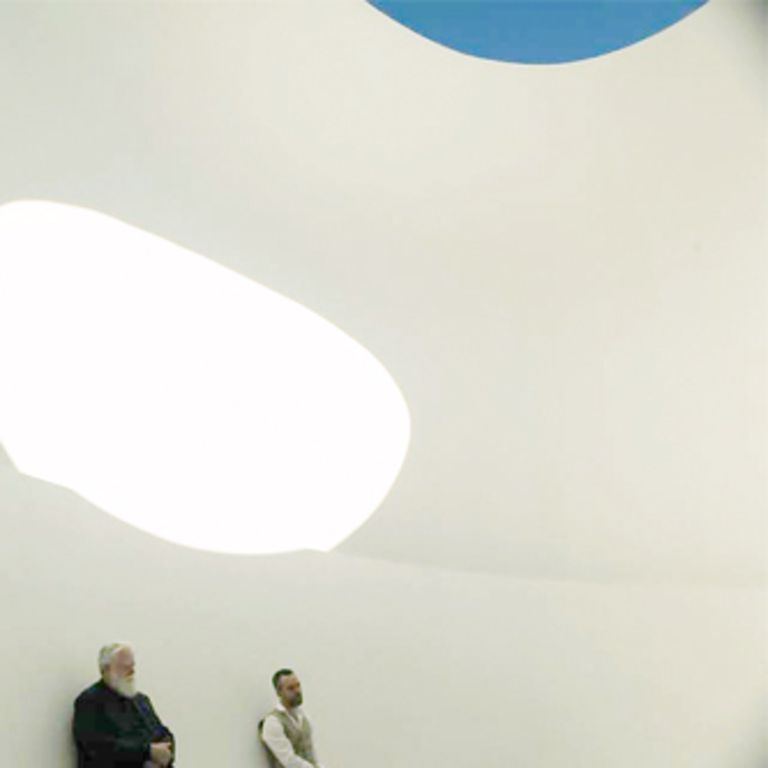 An installation version of Climata was exhibted in the National Gallery of Australia's Turrell Skyspace
Read a review in the Sydney Morning Herald by Prof Sasha Grishin of Australian National University. Further details in Canberra Times preview of the installation. Held on 5, 6 & 7 August 2015. 5-6pm.

Climata online interactive map feature in Electronic Beats magazine which can play audio recordings & documentation from Skyspace sites for Climata to create your own compositions from the recordings.

“A Turrell Skyspace is a specifically proportioned chamber with an aperture in the ceiling open to the sky. Skyspaces can be autonomous structures or integrated into existing architecture. The aperture can be round, ovular or square.”  There are 87 Turrell Skyspaces in the world, 15 of these in Europe, UK & Australia have been recorded for the Climata project.

James Turrell is perhaps best known for purchasing a crater in the Arizona desert. Since 1972 he has been transforming the Roden Crater, constructing chambers, tunnels and openings onto the sky within and around the crater’s surface, including several portals and Skyspaces*. Roden Crater is presently closed to the public.

Curgenven met Turrell in June in Cornwall, UK – the same day Turrell’s 40 Year Retrospective at the National Gallery of Australia closed on the other side of the world. The occasion in Cornwall was the inauguration of Turrell’s Skyspace at Tremenheere Sculpture Gardens - where Curgenven’s recording project had also begun in February. Prior to the inauguration Curgenven and Turrell sat and listened to the recordings Curgenven had made since February in a series of Turrell’s Skyspaces across 9 countries spanning contemporary art centres to private collections, national galleries and museums of modern art (see list below).

The sound “appears” to come from everywhere.
Like the recordings Turrell heard, visitors to the Climata sound installation and also listeners of the double CD will experience a subtle sense of disorientation, unable to tell from where the sound comes nor what comes from inside or outside as sound is shaped and coloured by the unique architecture of the Skyspaces. Painstakingly collected one "note" at a time within 15 Skyspace locations across Europe, the UK & Australia, the tonal component of the recordings interacts with the skyspaces making the soft movement of the air physically audible. This pushes listening into a more subtly corporeal and spatial experience. Listeners will literally be able to hear the air, the medium that carries sound itself, and actually hear the air around them.

Further detail about Climata
Reconnecting the root of the Greek word clima, referring to the ground’s grade or tilt, the eponymous concept “climata” comes from ancient mathematical astronomy. Climata (plural of clima) were illustrated as parallel circles around the world showing the ancient divisions of the early idea of a spherical Earth in times of Antiquity, with these divisions defined by the length of the longest daylight. The Climata Skyspace recording project reframes our relationship to land as well as sky and its light that defines our days, highlighting through the subtle physicality of sound how we describe and inhabit that which lies around and beneath that sky. The recordings, made entirely in the Skyspaces - each Skyspace with their own sphere of air, a piece of sky – invite us to hear those spaces and the air in the world that moves within and around them. For Turrell the Skyspaces work with light as his material and the Skyspace’s aperture frames that light. The process behind Climata also asks the further question - what else does the Skyspace let in and also frame?

Through the recording process the special acoustics of a Skyspace becomes an acoustic field, which, via the opening in the ceiling, becomes nested within the broader field of its surrounding area, allowing in not just Turrell’s famous light but also sound, weather and, importantly, air.

Realised in a range of subtle and perfectly tuned tonal interventions in Turrell’s Skyspaces, the gentle flutter within the recordings summon the same qualities in sound that we have become accustomed to seeing in the Turrell Skyspace’s framing of light. The recordings bring an aural transparency to the Skyspace’s architecture, making the Skyspace’s acoustics audible while at the same time drawing it further into the sounds from its surrounds and its sound into theirs. Recorded in locations ranging from quiet rural idylls to metropolitan centres, the qualities, textures and rhythms of the recordings are testament to the many different sounds borne on the air as also the sound of the air itself in the weather that it bears. From the first warm days of a European spring to snow gently falling on the Swiss alpine fringe, amidst humid squalls from Scotland driven over northern England to the gusty echoes playing out on a tree-lined lake after a Belgian storm - every recording has a unique combination of land, sky, tone, space and air. A rich archive of sound in space that adds new dimensions to an artwork that does more than provide a window to the world of light.

This recording of the installation preview was made in the National Gallery of Australia (NGA) Skyspace and is also the second track from the double album edition. The installation itself comprised some 40 recordings made in 13 Skyspaces across Europe as well as the NGA skyspace. This "re-recording" in the NGA skyspace adds a new acoustic layer to these recordings as well as further shaping their spatial nature.