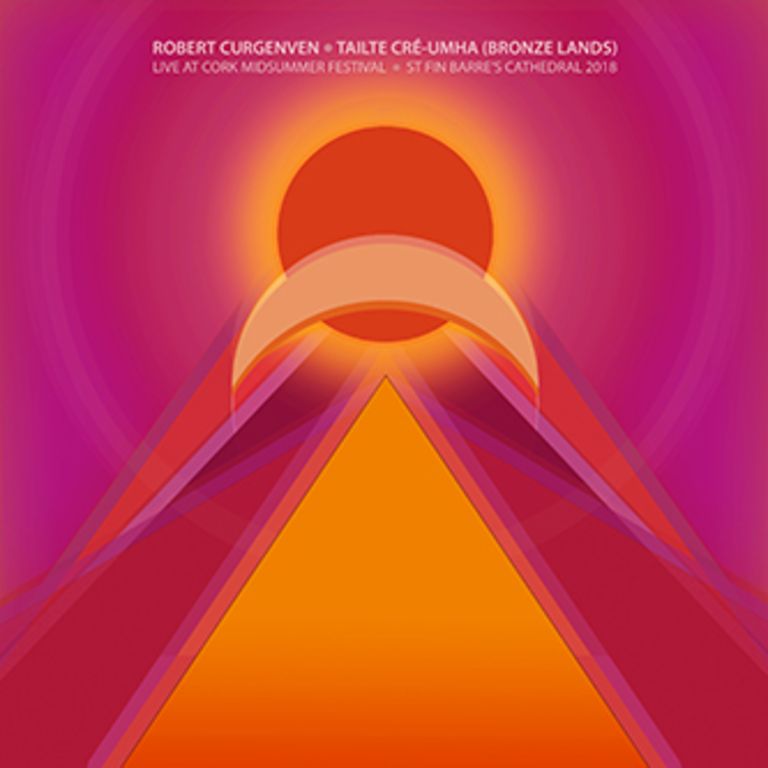 Following exactly 7 years after his last pipe organ release, SIRÈNE, with its strong maritime undertones, Curgenven presents this live recording of a new large-scale work for pipe organ and soundsystem. This document combines the warmth of a live audience with the long, full reverb of a cathedral pipe organ – captured and painstakingly assembled from multiple microphones throughout the architecture housing pipe organ and audience.Tailte Cré-Umha (Bronze Lands) is a solo performance for 32ft pipe organ and a 10ft dub soundsystem, developed during two months exclusive after-hours access to Ireland's biggest pipe organ in St Fin Barre's Cathedral Cork, along with a range of turn-of-the-century unmodernised pipe organs across County Cork and rural Cornwall.

The piece combines live pipe organ with a soundsystem which allows audiences to hear two pipe organs together - each in different tunings - effectively a piece for 4 hands (and feet), sounding together to create a physical and architectural experience. The live part on the venue’s pipe organ in standard tuning works with and against the part heard through the soundsystem. The soundystem part comprises tracker-action pipe organ recordings made in Cornwall and Ireland. These unmodernised pipe organs allow precise control over wind to the pipes - effectively creating custom-tunings. Curgenven's composition extends standard practice, combining these two tuning systems, rigorously working across their enharmonic beating frequencies to find a momentuous solution.The recording is 100% acoustic, all sound is entirely made by these pipe organs, with the exception of an 80-year-old 78rpm acetate which forms part of the piece's narrative structure.

The basis for the piece's score and structure draws on Ireland’s relations with Cornwall and Mediterranean Europe. 5000 years ago, coming into the Bronze Age, Ireland’s copper and Cornwall’s tin traversed the continent to make bronze. Tailte Cré-Umha derives the shape and movement of the score from the shape and movements of that route. Tailte Cré-Umha uses this navigation of the landscape itself as the score as those people and materials travel land, sea, sky and Europe at a time of change.

"Seriously lifted material from Robert Curgenven that amplifies Ireland's biggest pipe organ on a dub soundsystem. Bowel churning pre-Christian drones for anyone into Oren Ambarchi, FUJI||||||||||TA, Kali Malone, Áine O'Dwyer et al. Recorded live in 2018 at Cork Midsummer Festival, "Tailte Cré-Umha (Bronze Lands)" is an all-acoustic solo performance for St Fin Barre's Cathedral's 32ft pipe organ and a massive dub soundsystem. If that sounds odd and impressive, you'd be right: this follows Curgenven's solid run of releases over the last few years and might surpass them all. The sound of the organ is truly knee-shaking, giving the recording a character that's impossible to mimic digitally. The piece was inspired by Ireland's relations with Cornwall and Mediterranean Europe in the Bronze age, and feels as if it's channeling our complicated history through the epochs. There's the omnipresent character of the pipe organ that sings of hundreds of years of Catholicism, but the resonant drones and thick bass tones point to a deeper story. It's moving, historical material from Curgenven, that chimes harmonically with our obsession with pipe organ sounds. Recommended!" -  Boomkat

"It’s a rather masterful and deeply emotional set of organ drones from Australian-born, Ireland-based artist Robert Curgenven. The composition and performance is quite incredible, using one of Ireland’s largest organs at St Fin Barre’s Cathedral in Cork in tandem with a 10ft dub soundsystem, which played recordings taken in other cathedrals in Ireland and in Cornwall. It reminds me a bit of the emotional heft of Kara-Lis Coverdale’s Aftertouches, but really it stands apart from anything else." - Aidan Hanratty, Bandcloud

"It’s massive: a vast, deep expanse of pure tonal majesty that demands to be played as loud as possible. Unless you were there on the night, it’s tough to imagine quite how it would feel to have this immense sound course through you in a live context: something like Kali Malone, by way of Sunn O))) and Digital Mystikz, with sights set firmly on the depths of ancient history. Luckily for the rest of us, it sounds utterly immense on headphones too, so fill your boots." - Eoin Murray, The Quietus

"soothing and pummeling in equal measures, depending on the level of volume you have it at" - Pete Wiggs  (St Etienne) & James Papademetrie (A Year In The Country), The Séance (Brighton & Hove Radio)

"immersive listening which allows [you] to levitate through space and let yourself be carried away by the convergence of two different tuning systems" - Guillermo Escudero, Loop (Chile)